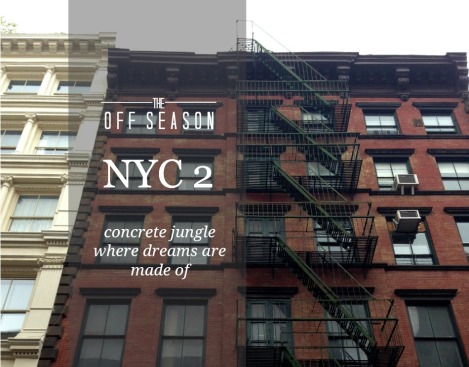 On my last NYC adventure with Melody, we were hosted by our friends Nia and Ryann.  We woke, on our last NYC morning, to the sounds of Mulberry St. out the window and a note scribbled onto a page ripped from a coiled book.  In Ryanns penmanship were directions to a place she suggested for bagels. Like zombies to live human flesh, Melody and I headed down the spiraled staircase [5 story walk up] and out the door following Ryanns instructions in hopes that this place also had a solid cup of coffee. Her casual note led us to Russ & Daughters – a bagel + lox lovers paradise; history + tradition + caviar cream cheese.

Soo…you could only imagine my excitement, this time around, upon realization that our hotel was right around the corner from Russ & Daughters.  First the free room upgrade then knowing that I could literally roll over and have a bagel + coffee in my hands – the SIXTY LES couldn’t get any better [hmmm well it could have free in suite wifi, but besides that].

Warning: brace yourself, this post is a long one; it was our ONLY full day in NYC and we had a jam packed itinerary.

day 2:
-woke up to a day that looked rainy yet do-able
-got dressed, left and operation get coffee commenced [I know I said “no repeats” but c’mon…we were rolling distance from Russ and Daughters]

site #2: 30 Rock
neighbourhood: Midtown Manhattan
location: 30 Rockefeller Plaza
where you’ll find: a modern Art Deco sky scraper in the ctr of midtown that’s home to NBC studios and an observation deck with a birds eye view of manhattan
Because It was a rainy day, one of the friendly security ppl advised us against going to the top as the visibility from the fog would allow us to see NOTHING; so we didn’t go up.  Thank you Mr. Security Guard you saved us $50.

-we crossed the street and headed to Bouchon Bakery

-macarons in hand, we walked to and through central park to the Met

site #3: The Metropolitan Museum of Art
neighbourhood: Midtown Manhattan
location: 1000 5th Ave
where you’ll find: the largest art museum in America, home to a vast permanent collection of antiquities, ancient art, modern and contemporary art and more.
We went to see the Costume Institutes latest exhibition featuring works from courtier Charles James [1906-1978]. Being a textiles nerd, I LOVED this exhibit. The couture dresses were breathtaking. The room was dark and each dress was dramatically showcased with a spot light and raised on a circular platform. Further supplementing each piece was a video that detailed sketches, the clientele for whom the dresses were created, and [what I found most interesting] the innovation + pattern making +construction + underpinnings behind the amazing voluminous silhouettes.

eat stop #5:  Ivan Ramen Slurp Shop
cuisine: Japanese
neighbourhood: Hell’s Kitchen
location: Inside Gotham West Market; 600 11th Ave.
we ate/drank: ramen
The ramen was ok.  It was tasty but the portion was a little small compared to others I’ve had. 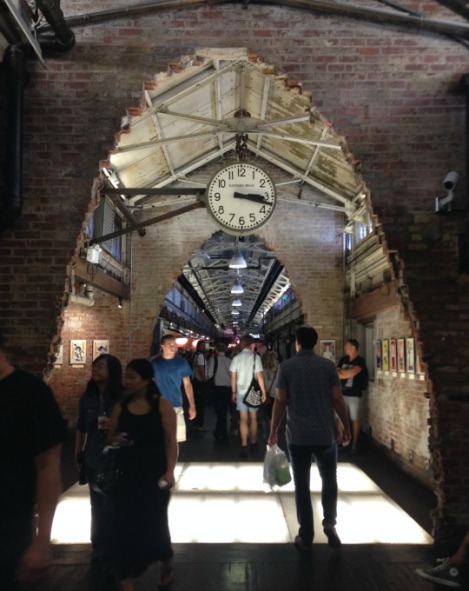 eat stop #6:  Chelsea Market
cuisine: Urban Food Court
neighbourhood:  Chelsea
location: 75 9th Ave.
we ate/drank: oysters from the Lobster Place [well I did, not Mike]
What drew me to the Lobster Place [beside the name] was the sight of people in the window chowing down on whole lobster on a plate; shiny, red, and plump -drool.  There was seafood everywhere!

– this ended our west side wandering,  we cabbed it back to the LES….and continued to snack before dinner

-on our way back to our hotel we stopped in at Pianos [158 Ludlow St.] for 1/2 off everything happy hour – WE LOVE HAPPY HOUR!
-$30 later [best value ever- have I mentioned that I love happy hour] we walked back to our hotel right before the torrential down pour hit
-relaxed + got dressed + left for our dinner reso

eat stop #8:  Alder
chef/owner: Wylie Dufresne
cuisine: Modern interpreted casual pub food + crafted cocktails
neighbourhood:  LES
location: 157 2nd Ave. [between 9th + 10th Streets}
we ate/drank: -see pics below-
The food at this restaurant was interesting.  True to it’s website description, it was modern interpretations of casual food.  The cocktails were on tap [which kind of threw me off…as i was expecting some hand crafted business….but i suppose the cocktail keg was hand crafted at 1 point] the food was good but the service was sort of a let down.  The onion soup onion rings were my fave of the dishes we tried.  I’m glad we tried what we did but we didn’t leave with that burning desire or need to come back. 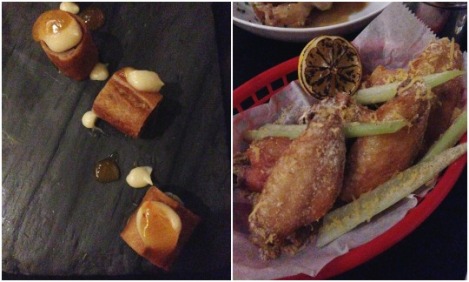 -after dinner we wandered around the area
-when we felt we had made enough room for more things to put in our stomachs we bar hopped around the east village.  [notable mention: Proletariat @ 102 Saint Marks Place | a speakeasy serving rare, new, + unusual beer]
-ended our Friday eats with 1 last late night snack

eat stop #9: Crif Dogs
cuisine: hot dogs!!!
neighbourhood:  East Village
location: 113 Saint Marks Place
we ate/drank: Crif Dog + coleslaw + fries + PBRs
The perfect last snack for a day of eating.  I had nowhere to put it but I ate it anyway.  The softest hot dog bun I’ve ever had.  Yum!

and that was our Friday.