To date, I have baked fruit, nut, chocolate, and candy inspired macarons; but never superhero.  I was given the challenge of baking a batch of Superman macarons for a superhero themed baby shower desert table.  This was a first and if I pulled it off, then I suppose ‘Superman’ would be added to my flavour repertoire.  I took on the challenge, however, little did I know how big of a challenge it would prove to be.

Lately, my macaron baking streak has been pretty good with only minor variations in feet [the ruffled edges around the bottom of the cookie] between batches.  This streak came to an end for this order as I failed a whopping 4 times!  My piped cookies were taking longer than normal to dry, feet weren’t forming, and each baking sheet of cookies cracked in the oven.  Beyond frustrated, reminiscent of my first attempts at baking macarons, I turned to troubleshooting blogs to figure out what I was doing wrong.  As I read through the FAQs, I concluded that humidity was the killer; my kryptonite.  The weather in Toronto was warming up, and so was my condo. 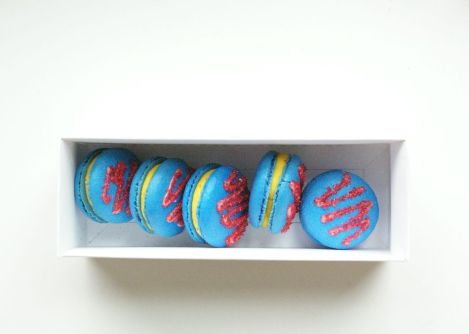 Though not a single batch came out 100%, I was able to salvage a couple from each to complete the order.  Phew!

I know you’re wondering, if Superman were a flavour, what would he taste like?  I didn’t know, sooooo to save myself the added stress after my failed baking episodes, I simply asked my friend  what flavour she wanted.  So, for all intents and purposes, Superman tastes like hazelnut.

Sprinkles make everything better!  Between blue coloured cookies, I sandwiched yellow hazelnut flavoured ganache.  To give it that added superhero touch and to cheer myself up, I decorated each macaron with red sugar. 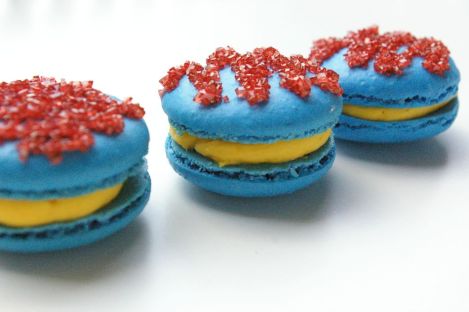 To adhere the red sugar… 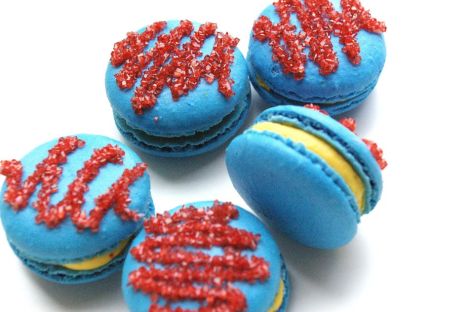 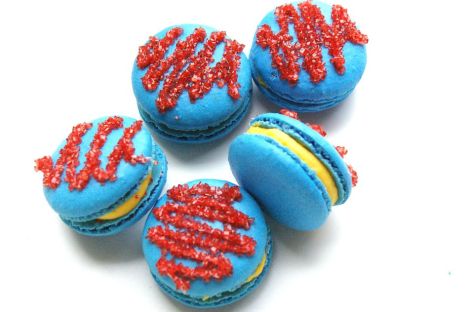 Though I have yet to make another batch since this frustrating attempt, I was told the macarons were a hit at the party.  Perhaps I will try again once this humidity spell comes to an end. 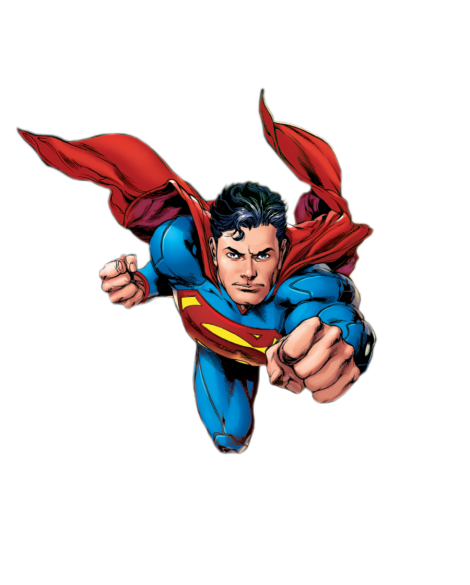 3 responses to “THE OFF SEASON: superman macarons”