Though I feel like football has already been going on for several weeks, Football Sunday [fbs] is, NOW, officially upon us.  This time last year, I made the decision to embrace this ‘religious’ phenomenon; I would escape the afternoon and return in the evening to reap the benefits of a day full of testosterone and food prep.  This commitment still stands but a lot has changed since the first kick off of fbs 2013.

Our frequent flyer crew of football fanatics has dwindled.  With the demands of a recent restaurant opening and another in the near future [in another province], the usual suspects have been around less and less leaving Mike solo for this year’s kick off.  A recent change on my end…an opportunity presented itself and I have taken on a part time job; well kind of.  This job requires I work 2 Sat/Sun’s a month.  So for those weekends, I guess my fbs escapes are taken care of.  Such was the case for this weekend.

I came home early afternoon to find that our condo had been turned into a 360º football viewing room.  Mike had 2 TVs and a laptop situated a head turn away from each other in each direction.  In addition to finding football on football on football, I came home to pot of chilli stewing on the stove top.  Usually, I am not a chili fan but this pot was delicious.  It had texture, spice, and sooooo much flavour.

We are kicking off football sunday 2014 with a big bowl of chili and all the fixins!  I hope you enjoy the recipe as much as I enjoyed devouring it by the bowl full.

…chili…
note: Mike doesn’t usually use recipes so I had to force him to quantify ingredients and make one. 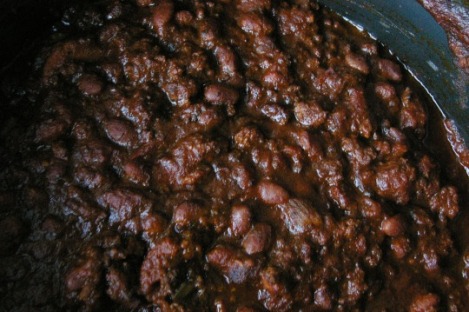 let simmer on low heat for 3-4hrs
as liquid evaporates, continue to add stock or water at a rate of about 2 cups at a time to prevent the mixture from getting too dense | use you’re judgement
near the end of hour 4, stop adding liquid and let reduce until the mix thickens in consistency 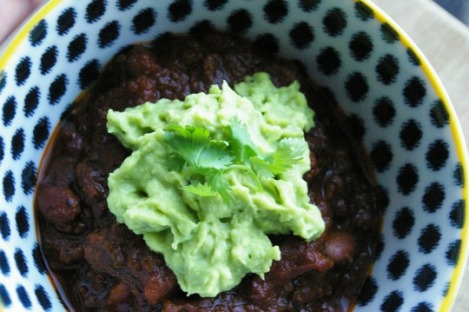 eat as is or serve with tortilla chips, sour cream, a wedge of lime or either of these fixins:

Before I close off week 1, here are Mike’s predictions for how this season will play out:

1- Dallas Cowboys have the worst season the team history and fire their head coach
2- Seattle Seahawks win the Superbowl for the 2nd straight season
3- Madelaine turns into a die hard football fan
4- Peyton Manning breaks his ribs and finally retires
5- Jacksonville Jaguars go from the worst team in football to winning their division and making the playoffs!

Solo or not, Mike’s football spirits could not be dampened by extra couch space.  His cheers appear to be louder than last year’s and his “oh baby”s have been switched out for “boo yah”s.

Dallas looses against San Fran…Football Sunday just how I remember.