You may or may have not noticed, but I decided to take the Pro Bowl off.  I was off to mentally prepare for the Super Bowl as I had committed to attending my 1st ever Super Bowl Party.

When Mike asked if I wanted to go to this party, the lure of chicken wings took over all of my cognitive processes and I hastily said yes.  Once my wing haze cleared, I realized that I had committed to being present for a FULL football game.  When football is on at home, I have the option to hide in the bedroom, bake something in the kitchen, nap in the den, or go to the gym. Attending this party meant that I would have to stick around from kick off to the ceremonial Gatorade-ing of the winning team’s coach. 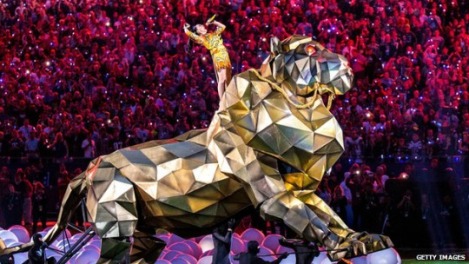 Now that the Super Bowl is over and Sunday has passed, I can surprisingly say that the game was actually entertaining; given I was distracted by great company, surrounded by delicious food, and for the most part, anxiously awaiting the half time show [I’m not a huge Katy Perry fan, but her performances are entertaining and her songs are catchy].  I have decided that I shall commemorate my 1st Super Bowl Party with my very own highlight reel.

**NOTE: I was too busy taking in my 1st SB party and didn’t take any pics [ food, football, or other ]… Also, I didn’t want to be the the weirdo snapping pics all night | apologies

Here are my top 10 Super Bowl highlights in no particular order.

1. Katy Perry entering the stadium on a GIANT tiger [ image from… ]

2. Missy Elliot getting her freak on

4. Katy’s seamless quick changes from 1 Jeremy Scott creation to the next one

6. Butler’s interception during the last 20 seconds of the game to clinch the win for New England.  So exciting!!!

7.  The table filled with cheese and warm dips that I stood beside with both feet planted

Though I had no ties to either team, I decided to cheer for New England and New England brought home the win.  All in all it was a great night.  Now that I have my 1st Super Bowl party under my belt, perhaps next year, we will host one of our own.  I can see it now, a buffet of chicken wings and a desert tower of football themed sweets.

This Sunday I did not escape. I was surrounded by football.
I survived another season!!!