I started this blog to chronicle my random Toronto adventures, to share my interests, and to potentially showcase my hobbies –a lifestyle blog.  As mentioned in the “about”, this site was [+ will soon be again] my vehicle to escape testosterone filled Football Sundays. I guess you can say that it’s my version of a football blog [ha].  At first glance, it would appear that, so it’s sunday, is dominated by food and less skewed toward the lifestyle genré [I mean, it’s a lot of food for a non-food blog].  However, as I further pondered upon this identity crisis, I came to the realization that my city adventures are usually food related, my interests include food, and my hobbies include making things to eat. So I guess this is a lifestyle blog after all.

This preamble was all part of my thought process as whether or not this non-edible post would be completely misplaced. For those who may say ‘yes it is’ consider the above my explanation necessary.

The travel bug is buzzing and its about to perch and bite.  It’s already infected my friends and as a result my Instagram feed has never been so amazing.  Thanks to my nearly 24/7 stalking of their accounts, I was able to add some worldly colour to this post.

some of my favorite shots from this past week [totally obnoxious and completely amazing!]… 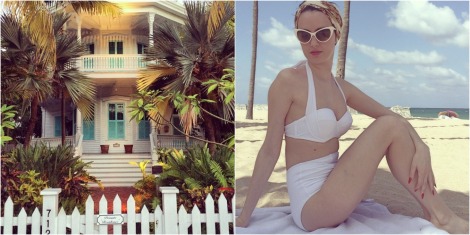 So…where am I jet setting?  Mike and I decided to start a new tradition.  As we approach 2 years of marriage, we decided to forgo gifts and, instead, to go on a trip [near or far].  Our wedding anniversary weekend, from now on, will be spent in a new place.  Year 1, we skipped town and drove to Niagara Falls [not that far but still a new place] + for year 2 we are headed to NYC.

Mike + I have both done NYC individually but have yet to experience it together.  We are starting to plan and it should be no surprise that our list is dominated by restaurants.  Since neither of us hit up any of the tourist landmarks on our visits, we’ve peppered them in – just to say we did it.  So here’s our first [un edited/work in progress] list of things we are looking into/would like to do while in the big apple.

the accommodations: The hotels cost more than both our plane tickets combined, but it is New York and therefore, I’m not that surprised.   We thought long and hard, should we stay off the beat and path yet on the subway line to save some $$? how about an air bnb?  After Mike fought me on location and price, I told him that I would deal with all the hotel stresses and booked us 2 nights at the SIXTY LES [Lower East Side] – great location + night life + restaurants + walking distance to other great neighbourhoods.

the sites:
Statue of Liberty [will be fully content with seeing it from afar]
Empire State Building
The High Line
9/11 Memorial
Brooklyn Flea
…

the arts:
On any other trip, this list would be much longer but given our time frame + the fact that I am with Mike I have narrowed it down to 1 museum – the Met for the Charles James exhibition

the shops:
Bergdorf Goodman – I’ve been by to observe the beautiful windows but have yet to go inside.  After watching the documentary, Scatter my Ashes at Bergdorf’s [3 times] + reading the associated book, I am even more eager to step through its doors.

the eats:
As much as we would love to eat at the places we LOVED during our individual visits, we decided no repeats

We have 3 weeks to narrow down the list.  Stay tuned to see where we actually went and what we actually ate.

While on the topic of travel…before the year is up, I also have my eye on visiting Glasgow + San Francisco

city: Glasgow -Scotland’s largest city and the 4th largest in the UK location: on the River Clyde in the west central lowlands
known for: shipbuilding + marine engineering industries
who: Melody + Billy – 2 of our closest friends from Winnipeg now living in this city as Melody completes her Masters Degree at the University of Glasgow
I would love to see the lush greens and tulip lined hills in person; the same ones that I fawn over on Melody’s instagram [like above photo] and the same ones she randomly snaps pics of and sends me on her walks to school.

city: San Francisco
location: Northern California’s West Coast
known for: steep rolling hills + eclectic architecture + the Golden Gate Bridge + cable cars
who: Maddy -no longer California dreaming [pic above from her instagram]
Forever engrained in my memory as a child, the Tanner’s + Uncle Jessie + Joey driving along on the Golden Gate Bridge in a red convertible – the home of Full House…duh!

One response to “the off season: 2 years later”