See you in 2 weeks were his last words.  Kial closed the door behind him and Football Sunday was over.  I did an auditory double take to confirm that I wasn’t hearing things; NO FOOTBALL SUNDAY NEXT SUNDAY?!  Confirmed, no Football Sunday next Sunday!  Unbeknownst to me, until that very moment, Mike was expecting family in from out of town and had arranged a visit next Sunday.  There was no Football Sunday to escape and yet my plans for an escape were already set.  Though family was in town I knew that football would still rear it’s helmeted head in one form or another – so it was Sunday as usual for me.

My Sunday morning started later than normal.  There was no one up at 8am; no one asleep on the couch; no conversations being had over top of NFL Game Day Morning anchors; and no one sporting a jersey of any sort out in public.  This morning felt familiar; it was my off season Sunday morning life.  As these mornings are now few and far between one can do nothing more than close ones eyes and enjoy 10 more minutes of un interrupted sleep.

At minute 11, Mike was up and college football was on the TV.  Mike steeped us a fresh pot of french pressed coffee and we both got ready for our Sunday as college ball continued to serenade us in the background.  I was ready to meet Maddy for brunch and Mike was ready to meet Uncle David for some family catch up.

This wasn’t just any brunch,  this was Maddy’s last brunch as a gal in her mid 20’s.  Her next brunch, and the ones to follow, would be the brunches of her late 20’s.  We had plans to go to the ROM post brunch so Maddy suggested going to Wish; a restaurant outside of our usual West End neighborhood but near the museum.

Upon arrival we walked passed a fountain and through a small white linnened patio to the hostess stand where it felt like forever [because it was] before we were seated.  Wish was a small intimate place decorated in cute uptown shabby chic everything.   The brick walls were painted white, the bar was reclaimed, and the dining chairs were a country feel but turned up with a shade of chartreuse.  The crowd was different and the conversations that surrounded us were a different level of obnoxious [note: I love a good obnoxious conversation].

After brunch we strolled over to the ROM to meet up with others to see Something BIG; a textile/fashion exhibition that showcased items that were in some way considered BIG [in size, significance, price, etc.].  The website painted a very exciting picture and we were eager to see it.  I guess our expectations of this BIG exhibit were too big.  All of us, except for Julie [but only by default as she’s new to the country] came to the realization that we had already seen most of these pieces at one time or another and were therefore disappointed with the 15 minutes that it took us to wander the space.

The centre piece of the exhibition was a John Galliano design of a 21st century reworking of the 1947 Dior new look.   Along side it played a video that showcased the construction of the dress from hand stitched layers of tulle to individually hand pressed pleats.  This dress was part of the last collection that Galliano created for the design house before he was booted for his anti-Sematic comments; scandal!

To get our $ worth we visited the animals, both of the extinct and non extinct variety, and then headed back to the West End.

I made it home in time for dinner and to catch with Uncle David.  He was in town only for the weekend and came with the gift of striplion; the only bouquet better than flowers.  Mike lasted longer than I thought he would before turning on a football game.  He held conversation quite well with only marginal pauses as he diverted his full attention to the game and then back to conversation.   For dinner Mike grilled striploin, pan seared asparagus, and jazzed up the basic potato by making a quick gnocchi.  I never object to meat and potatoes!

A canceled Football Sunday was really for the best as It’s always awkward seeing grown men in matching outfits succumb to the emotional roller coaster ride known as the Dallas Cowboys; up and pumped at the half and then choked and lost the game by a TD at the end – which usually translates to cheer-cheer-fist pump-high five-jaw drop-anger-silence.  That’s 1 Dallas loss avoided! 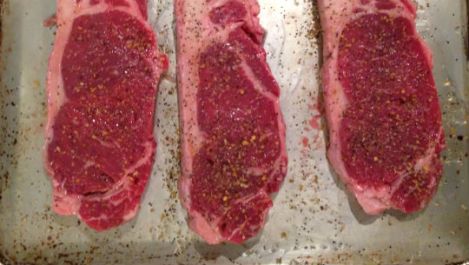 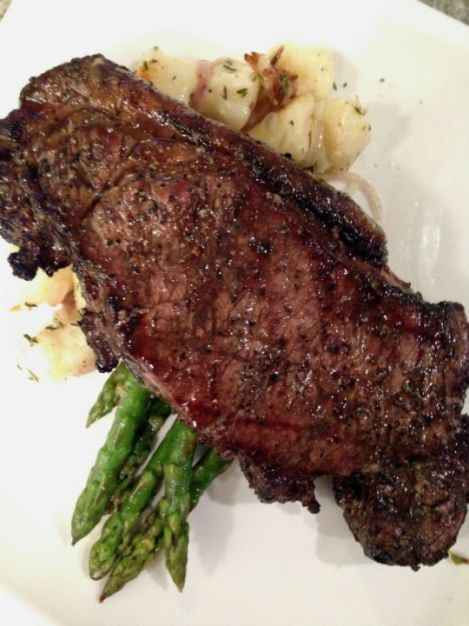 -Football Sunday will be back in full force next week.

One response to “meat and potatoes”

There was an error retrieving images from Instagram. An attempt will be remade in a few minutes.