6:45am – my alarm rang and I woke up after hitting snooze 3 times prior.  Like every Canadian in North America, I was up obscenely early for a Sunday to watch Canada defend its gold medal in the Olympic hockey final against Sweden.  I don’t usually watch hockey but I LOVE the Olympics and therefore Olympic hockey is something I can get behind.  I thought it would be appropriate to launch my OFF SEASON series with a sport related event and what better one than this gold medal final.  #GoCanadaGo! 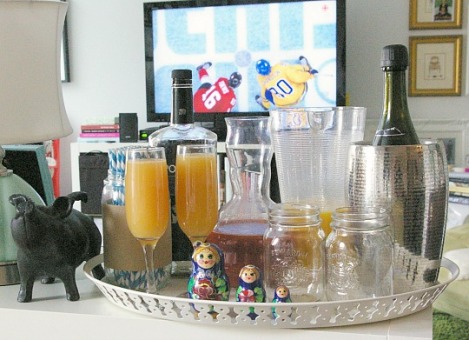 To celebrate this once every 4 year event, Maddy and I staged a Canadian themed breakfast as we watched the game.  Mike was already at work as his restaurant, like several others, were open bright and early for the final; so it was just Maddy, Charlie, and me.  Since neither of us had any team Canada gear to sport, we dressed in our reddest flannels and were set to whip up a batch of banana + blueberry pancakes.   As we sipped mimosas half awake, we sifted, mixed, and scooped.  We were in full pancake mode by goal 2.

To get the fluffiest loveliest banana pancakes, Maddy and I tweaked a blueberry pancake recipe from the Out to Brunch cookbook by Donna Dooher + Claire Stubbs [and by tweak, I mean we simply added 2 ripped smashed bananas].

If you’ve been to Mildred’s Temple Kitchen for brunch in Liberty Village, then I’m sure you’re more than familiar with these pancakes.

in a large bowl sift flour + sugar + salt + baking powder + baking soda
in a separate bowl beat eggs + buttermilk + melted butter
w/ a spatula combine dry + wet ingredients to make a thick, lumpy batter taking care not to over mix
in a non stick skillet, melt some butter over med-high heat | ladle 1/3c of batter into skillet + sprinkle w/ blueberries
*the pancakes puff as they cook so do not over crowd the skillet | we did 2 at a time
when bubbles appear on the surface + the edges begin to brown flip the pancakes and cook the other side | it should take 2-3 minutes per side

To ensure we carried out the Canadian theme, [in addition to a dollop of whipped cream] we devoured these pancakes with maple syrup and a raspberry sauce [extra red!]. 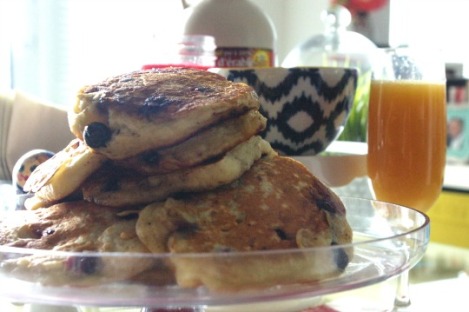 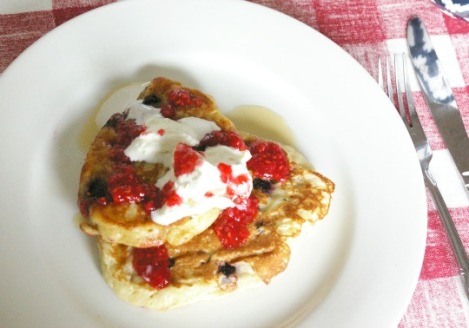 Nothing pairs better with a gold medal than golden brown pancakes.  Job well done to both hockey teams and to all the athletes who represented Canada in Sochi!

-Proud to be Canadian!